The Last milestone in learning Hindi Typing is Hindi Typing Code reserved for typing special keys of Hindi keyboard which are not provided on keyboard keys so they are typed using ALT and NUMERIC code combinations. These special characters are very important to learn because Hindi Typing is incomplete without them. They are frequently needed in any Hindi Typing exam so, That they must not be ignored at all. Here we have provided the exhaustive list of ALT code combinations which are also called Hindi Typing Code, you can try for yourself on the onscreen keyboard. You can type these Key Combinations using either numeric keypad or numeric keys given above the alphabetic keys. For Example, you want to Type 'रु' you need to type ALT+035.

KrutiDev is a Hindi keyboard Layout which is in use for a long time since the dawn of early Type Writers, But the number of characters which can be typed using alphabetic keys outnumbers the respective key available on the keyboard. So, to come around this problem a special set of characters which are less frequently typed than typical characters on keyboard are devised which can only be typed using Alt+Number combinations. Although they are less frequently typed in the Hindi language their usefulness couldn't be denied. So a Typist can not ignore them at all. They are used more in literary Hindi where these special characters are frequently used. Hence we have given a comprehensive list of KrutiDev Special characters Typed using Alt key combinations.

Inscript Layout was devised especially after the arrival of computers so that in the text editor text will be printed on Unicode which means Hindi text will be printed as it is. For shortage of keys on keyboards, especial method of Typing keys using alt+number key combinations was developed. They might be special keys of Hindi but they are as useful as regular letters. Nowadays Inscript Layout is getting popular in Indian Government offices. By regular practice, one can master these alt key combinations. Below are produced a most exhaustive list of Online Hindi Typing ALT CODE combinations.

Note: These Hindi Typing Code work only in Word 2003+ for Windows. 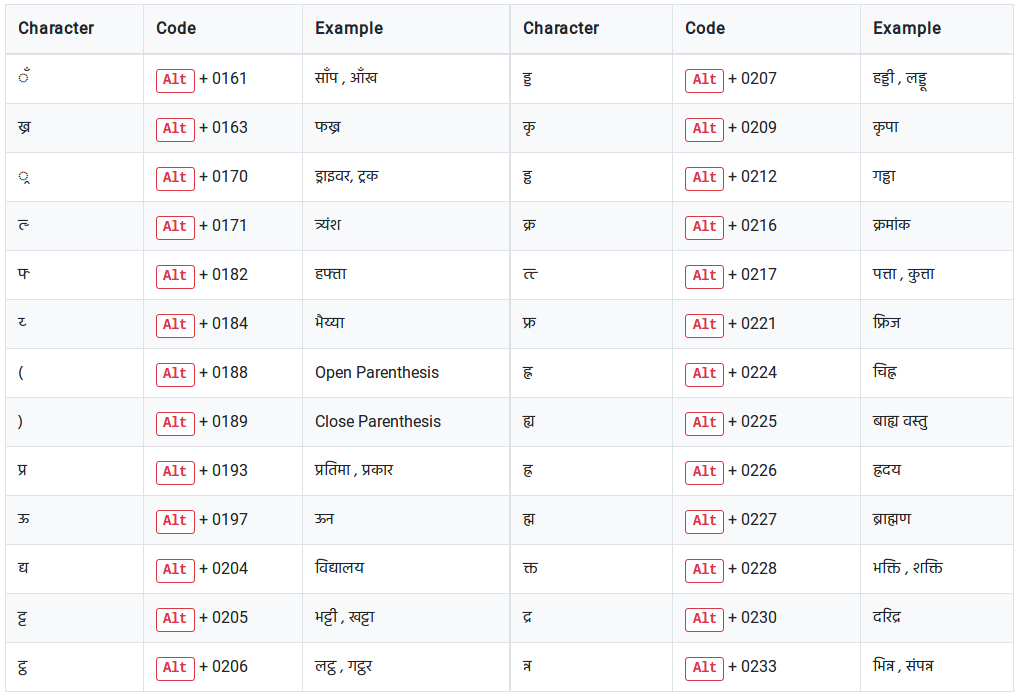